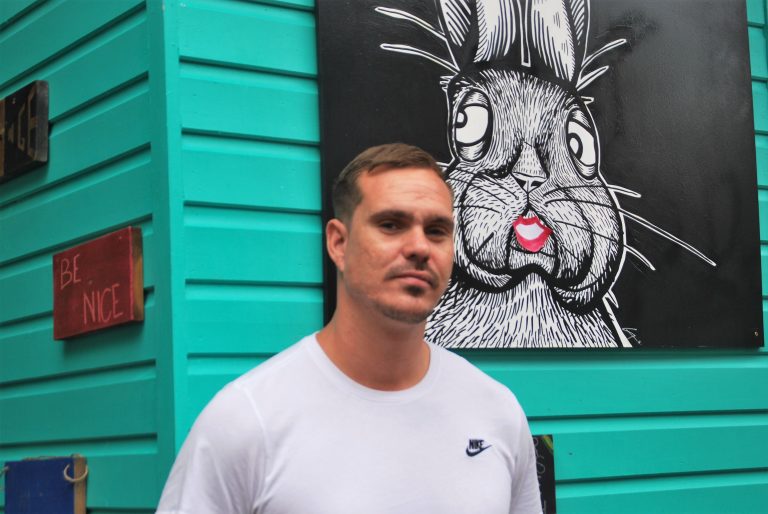 Chandos House is threatened by closure. Former residents there speak out about how treatment got them clean.

“I was literally near death. I was skinny, I couldn’t work, I couldn’t function without having a drink inside me.” Just 18 months later Dave Hill gave up alcohol and says Chandos House saved his life.

Located in leafy Redland, the last drug rehab centre in Bristol is on the brink of closure and fundraising to secure its future.

As reported by the Cable, funding cuts are hitting Bristol’s drug and alcohol services hard. Chandos House’s executive director James Dickinson says the funding received from local councils has forced them to cut staff numbers in half and raise extra money to keep treatment going.

Fundraising attempts have been boosted by support from celebrities Will Self and Bristol street artist Inkie, but Dickinson says the centre will have to close within weeks if £100,000 isn’t raised.

The rehab centre offers treatment to up to 15 men, who either receive funding from their local council or pay for it themselves. The residential treatment is based on hollistic approach with one-to-one support, groups sessions and creative activities like art and yoga, as well as access to aftercare once they have moved on.
However, referrals to Chandos House have halved recently as councils are less prepared to pay for residential rehab, Dickinson says, with the average number of Bristolians entering treatment going from six to one.

The Cable spoke to former Chandos House residents about addiction, rehab and recovery. 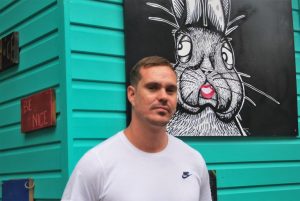 It is Christmas 2016 in Plymouth. Dave Hill has been in and out of hospital and spent time in police cells, all because of a legal drug – alcohol. “If I went through that Christmas, I probably would have drunk myself to death,” he tells the Cable.

“I was literally near death. I was skinny, I couldn’t work, I couldn’t function without having a drink inside me. If I didn’t have a drink, I’d shake, have seizures, I’d drop down to the floor.”

A doctor tells him: “If you don’t have a drink, you will die.” “It was quite scary for a doctor to tell me that because I didn’t really know I was an alcoholic,” Dave recalls.

“My life was going nowhere, I was a disappointment to my family so they wanted the change. I wanted the change.” Dave’s family said they’d pay for rehab and he got funding for treatment at Chandos House in Bristol.

“Eventually this place did save me. This place gave me a structure to my life and made me understand why I drank, that there’s a life after drink, that life didn’t revolve around drinking.”

We meet on a scorching hot July day on which England are in the semi-final of the World Cup. Thousands of people are congregating on the streets of Bristol in a short-lived moment of shared national experience – lubricated with a pint or two of beer.

“Now you’ve got the football going on, nice weather, all that would have been an excuse to drink but now I look at it like I don’t need to have a drink to have a good time,” he says.

For Dave, “every day is a struggle” while in recovery, but he seems happy with his new life.

“I love Bristol. I’ve got everything I want here. Now I can remember things. I’m not waking up thinking ‘what happened last night?’. I’m not having three litres of cider and relying on that to get me through the day.”

Instead, helping people is getting him through the day – by volunteering at three different places, including a charity shop and helping others in recovery.

How does it feel to help? “It’s massive. My work before was labouring, doing odd jobs, I would never have done volunteering, I thought it would have got me nowhere, but in reality it’s a relief helping other people. I enjoy giving back to what helped me.”

Dave has been clean for a year and has rebuilt relationships with his family. “Everyone’s proud of me. My parents live in New Zealand. but it’s nice I get a lot of praise from them. I’ve got my whole family back in my life now.”

He isn’t getting ahead of himself, though, and is taking each day as it comes. “Every day I’m recovery. I can’t forget that and it’ll probably be a full-time thing until the day I die.” 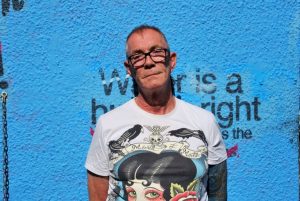 “The more horrible things a person does to get drugs, the further they move away from themselves. I became the person that the drugs made me.”

Tony Fortune has been grappling with addiction for most of his life. He first took drugs when he was 17 and has just left Chandos House at the age of 60, looking for a fresh start.

After finding success working in theatre in London and performing in Covent Garden as a young man, Tony’s drug use started to get the better of him.

“I had enough money to do copious amounts of cocaine, as well as drink and heroin. I ended up squatting over Kings Cross, getting involved in shoplifting. I was in and out of prison. I was a sad young man and any direction was lost.

“The drugs started to take over and my desire for drugs became a lot stronger than my desire for life. I would go to any lengths to get more. My using got harder and so did I.”

Petty crimes became organised crime, armed robberies and drug dealing. “I ended up just becoming a very violent man, but the more I took, the more I wasn’t being true to myself, because I am actually quite a sensitive, caring person,” he says.

After falling off the wagon, it all became too much. “It got to a point where people were getting stabbed, people were trying to stab me over a few hundred quid.”

He was getting too old and couldn’t do it anymore. Using all the money he had, he booked into treatment, and after a detox, where he was “pushed around in a wheelchair for two weeks”, he ended up at Chandos House.

“When I first came here I didn’t realise how angry I was, I could start a fight in the mirror. It’s only through love and understanding here that I’ve managed to get through to myself.”

“It’s the only place that I know of in the country that has a really different kind of approach to addiction. They look at the whole being instead of just the cause of the disease. It’s about positivity, it’s holistic.”

Now that he’s done that, he is looking to relaunch his career in theatre, to start with by putting on puppet shows at the People’s Republic of Stokes Croft.

“I was a heroin and crack addict for 20 years. It pulled my life apart, I had a chaotic, destructive life and it got more and more chaotic and destructive. It was hurting people around me, family, friends.”

Giles has just left Chandos House after four months as a resident. Originally from London, he bounced around different rehabs before landing in Bristol.

About two years ago, things had to get worse before they got better. “It got to the point where I was left on my own with nothing to live for, having suicidal thoughts. I had a few big arguments with my close friends and it was put to me that if I didn’t sort this out, I would die. I was given a bit of assistance to get to rehab in Bournemouth where I started to take responsibility for myself.”

Later, a stint at Chandos House helped Giles get clean, but he then relapsed and ended up homeless. In a mess, he went back to Chandos, who took him in again for a full course of treatment.

“It’s been life changing and life saving,” he says. “What they do here is treat everyone as a person not a generic addict patient with a one-size-fits-all approach. It very much caters for each person and lets everyone become themselves – the person they should be.”

But for Giles, getting clean is not just a triumph for himself, but for everyone. “What addicts do affects society in general, and councils and governments don’t realise that. If you don’t treat me, you’re gonna pay in crime, in prison, in NHS health bills through the roof. As it stands, I don’t commit crime, go to the hospital, I pay my taxes.”

Now in a dry house, “things are starting to fall into place,” Giles says. “I’m feeling good now. I’ll be staying in Bristol. Confident is probably the wrong word, but I feel positive,” he adds.

“There’s a danger with addicts that you want to achieve everything instantly. Like with any project, you need to build solid foundations and go from there – all the things that addicts aren’t very good at – but I’m learning patience.” 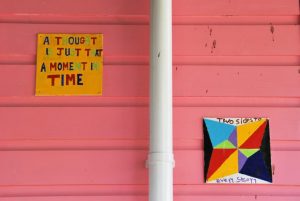 Some of the positive messages dotted around Chandos House

Kenny Fenti is another former resident at Chandos House. He is 16 months clean after being a heroin addict for 30 years.

“I’ve done a lot of treatment, a lot of rehabs. I personally didn’t realise that I suffered from trauma.”

“It was (Chandos House) that made me start looking at stuff I didn’t want to look at, especially childhood stuff. I noticed the more risks I took, the more I felt lighter. I had a lot of baggage I was bringing with me but never looked into so it was a place where I could take the bag off, put it on the floor and pick out what I wanted to look at, you know.”

Kenny has been in an out of treatment for 25 years, including rehabs where you get shouted at and put down. “I don’t need people putting me down – I’ve been putting myself down for years.”

By contrast, it was the positivity of Chandos that made the difference. “That’s what sort of broke the barrier for me. I was used to hardcore rehabs but people said I needed love and to love myself again. You know when you’ve had no love or kindness in your life and you come here and that’s all they give you, it’s unfamiliar sometimes but it opened my heart.”

He grew up in Brixton in south London, has never really worked and didn’t succeed at school. But now, as well as doing mentoring at Chandos, which helps him give back and “stay grounded”, he’s studying at college and doing volunteering at mental health services at Callington Road hospital in Brislington.

“I talk to the patients, because sometimes the patients there don’t trust the workers so won’t declare everything to the doctors. When they find out we’re not a doctor, nurse or psychiatrist, they talk to us a lot.

“This time last year I didn’t expect me to do anything like that. The tables have turned 360, man.”

“Because I’ve done so many hostels and wet houses, that’s where I’d like to channel myself and help and give back – a night worker or support worker in one of those hostel places, where people have given up on addicts and don’t want to touch them.”

He’s now living in a dry house in Henleaze with four others, two of whom also used to be at Chandos. “It’s a nice little community. Bristol is different. I’ve got to say it’s a very nice place. I like the diversity, I was working at the Carnival. It’s got so much to offer. London’s a bit hardcore, a bit too much. Bristol isn’t like that. I feel comfortable here, no stress.”

Original article posted on The Bristol Cable click to view.